What is to be considered in storm

How can I secure my teepee or the yurt in a storm?

The nature is always stronger, but there are measures that can be considered in a permanent use to better secure the tents.

What should be considered during a storm at a tepee?

The tipi is ideally adapted to the conditions of an open prairie. However, it is important to pay attention to how you align it and where the wind blows most from the very start. In valleys or in the mountains, experience is needed and alignment needs to be adjusted according to existing circumstances. In the northern hemisphere, however, the weather mostly comes from the west and thus the tipis are aligned with the entrance to the east facing away from the weather. East winds are rare and so it pulls the smoke up nicely from the smoke flaps. See also the tip Align smoke flaps.

Guard before the storm: 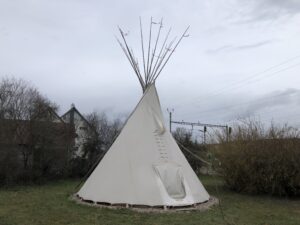 Tour after the storm:

What should be considered during a storm at a yurt?

The yurt is designed for the open prairie, making it a relatively stable tent. Here it is simply important that in very exposed places there is a good anchorage in the natural soil. For larger yurts, it is also advisable to leave the abutment posts permanently in order to reinforce the bracing at any time if required. There are some safety measures that can be added to a yurt to increase stability.

Guard before the storm:

Tour after the storm:

For permanent installations, it is advisable to check in advance with the insurance whether the natural tent is covered by the elementary insurance. Most insurances cover storm damage over 100 h / km. In the event of damage already existing, we will make an offer for the insurance upon request.